I want to volunteer 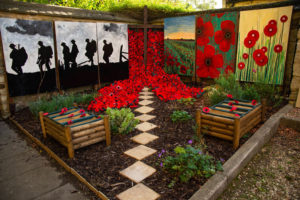 This beautiful Poppy Art installation has been created by the community of Towcester and can be viewed in the Garden of Remembrance at St Lawrence Church, Towcester (behind the Town Hall).

There are further poppy displays in the church along with silhouettes from the “There But Not There” charity.

These may be viewed until 27th November.  St Lawrence Church is open every day from 9.30am – 5pm.

A message from the organisers…

Thank you so much [to everyone] for your contribution to the stunning Poppy Art installation at the Garden of Remembrance.  On Saturday we received a lot of praise for the fabulous work that you played a part in and since then there has been a steady stream of visitors to St Lawrence Church who have admired both the installation and the poppy displays in the church.

We have also been able to use some of the poppies at Towcester Cemetery where the War Memorial is situated.  After the Remembrance Service at St Lawrence Church on 11th November there will be a parade up to the Cemetery from The Bull on Brackley Road.

From little acorns (the roll of poppy material from my visit to the Poppy Factory) grow mighty trees (in this case a cascade) and I think that our project was a worthy addition to the dedication of the Garden of Remembrance, with the church and RBL, as we commemorated the Armistice of such a dreadful war, that did literally effect every family in this country. It was so good to have so many community groups and all 3 Towcester schools involved in the project.

We must pay special thanks to a serving soldier who we are indebted to for taking on the construction of the art installation for us.

We hope that this project will also help the town: as Towcester is ever expanding our community has come together with old Towcestrians meeting newcomers to the town. So not only were we commemorating our heritage and educating the younger generations but hopefully we have also built bridges; friendships have been formed and we have joined together as a community through the work of the project.

It has become clear over this week though that not all residents of Towcester are aware of the Poppy Project so please pass the word on to your group, family, friends and neighbours.  I have attached a poster/flier that may be of some use to you.

Finally, on behalf of the stakeholders of this project- Royal British Legion, St Lawrence Church, School of Life Project and Towcester Evening WI – we would like to extend our gratitude in your support for this project: it would have been nothing without the input of each and every group and the schools and individuals of our town.

With our thanks and gratitude.

Keep notified of what’s going on